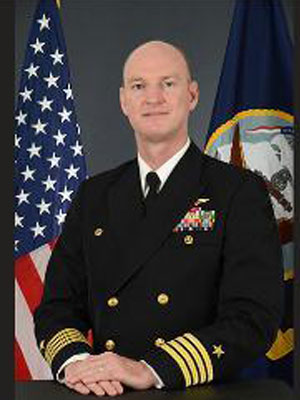 Captain Patrick Foege hails from Edwardsville, Illinois. He graduated from the United States Naval Academy in 1992 with a Bachelor of Science degree in Weapons and Systems Engineering. Following an overseas study program in Salamanca, Spain, he proceeded to Naval Aviation Flight training in Pensacola, Florida where he earned his Wings of Gold in 1994.

Captain Foege served as commanding officer of Helicopter Anti-Submarine Squadron (HS) 10 flying the H-60F/H Seahawk. During his Aviation Command tour, he was the recipient of the peer selected Navy and Marine Association Outstanding Leadership Award. Following his command tour, he deployed as Air Boss aboard USS BONHOMME RICHARD (LHD 6) and completed a hull swap with ESSEX in Sasebo, Japan. Captain Foege commanded Amphibious Squadron ONE from July 2016 to December 2017 after serving 18 months as Deputy Commander.

Ashore, Foege performed flight instructor duty with HC-3 where he was named Instructor Pilot of the Year. His staff assignments include Deputy Executive Assistant to the Commander U.S. Pacific Fleet in Pearl Harbor, Hawaii. He completed a joint duty assignment at U.S. Transportation Command in the Operations and Plans Directorate, during which time he was selected as the Scott Air Force Base, Illinois Field Grade Officer of the Year, and served as the Deputy Executive Assistant to the TRANSCOM Commanding General. His most recent shore assignment was at Tactical Training Group Pacific where served as the Operations and Plans Syndicate Director.

In Aug 2019 he assumed the duties as Commanding Officer and Professor of Naval Science for the Naval Reserve Officer Training Corp (NROTC) Atlanta Consortium comprising the NROTC units at both Morehouse College and the Georgia Institute of Technology.

Captain Foege earned a Master of Science degree in Global Leadership from the University of San Diego and he completed Joint Professional Military Education at the Joint Forces Staff College. 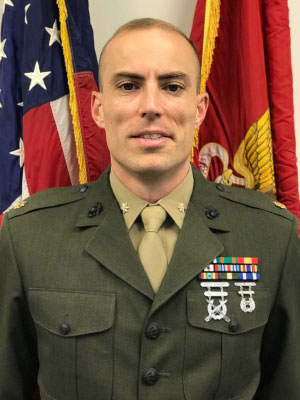 Major Pomeroy is from Plymouth, MA and graduated from The Citadel in 2005 with a Bachelor’s of Science degree in Business Administration.

Upon graduation, he attended The Basic School and went to NAS Pensacola for training. He completed the Naval Aviation Maintenance Program Course and was designated an Aircraft Maintenance Officer.

In September 2009, he reported to MCRD Parris Island. He served as a Series and Company Commander in Second Recruit Training Battalion.

In June 2018, he reported as the Executive Officer and Associate Professor of Naval Science for the NROTC Atlanta Region.

He graduated from USMC Command and Staff College with distinction. He holds a Master’s in Military studies from Marine Corps University and an MBA from Auburn University.

He is married and has 3 children.